Just Because I Can't Eat It Doesn't Mean It's Not Sweet: - Dispatches from Day 32 as an Escort at a Women's Clinic


(writer's note again: last time I apologized for the long gaps between posts. This time I'm going to assume a slightly different approach. Instead of waiting until I have enough material for the usual length of post I shoot for, I'm just going to go with what I've got after a shift. This means the posts will be more frequent than in the recent past but likely somewhat shorter. Tl;dr: More posts, shorter posts. Thanks for reading - Kit)

"I don't know why you have to use the rainbow, but you can't even get that right. A rainbow has seven colors!"

Yeah, Parker's still hung up on our escorting vests and my Pride flag/cape. Evidently on ROYGBIV, as well, which actually makes sense for someone stuck living in the past.

I'm never going to say that an escorting shift can be 'easy' but when a quiet, uncomfortable-looking young couple bolts at around nine o'clock we outnumber the protesters for the moment. Maybe it's too nice a day to SAVE THE BABIES? Not going to complain about that, but I will kvetch with great and furious purpose about the Runner showing up at 8:30, which is just straight up bullshit. Nobody wants that.

Low protester turnout plus us having a full crew allows me to stand directly in front of Parker's speaker, which has him in an extra salty mood. He snarls at me as I once again question his assertion that 'Satan is a murderer,' first insisting he answered it last time (he didn't) before launching into a lengthy rendition of the Adam and Eve fairy tale. When he finishes that he says, "There. That's why he's a murderer."

As he drones on it comes apparent that the rainbow thing is really sticking in his craw, as he can't stop going back to it. Other screamers in the past have insisted that they were 'going to take the rainbow back,' whatever that means, but Parker wants to claim superiority because my Pride flag only has six colors. He's pretty smug about it, smirking at will. "Everyone knows a rainbow has seven colors."

Alas, his arrogance may well be misplaced. In recent years indigo has pretty much been combined with purple, as the concept of a seven-color rainbow has a pretty strange origin. Hell, half the people with me on the shift have never heard of good old Roy G. Biv. I do my best to explain this to Parker but he's shifted tactics to talking over me and insisting I'm FAKE NEWS.

A breeze kicks up, only for a moment or two, but enough to make my cape flutter in his direction. Six colors seem like enough to get the job done.

"Can I steal their signs?"

My rookies are *feisty* today.

In the early days of our escorting crew, long before I entered the ranks,the founders often found themselves taking shifts on consecutive weekends to make sure they had enough escorts. They didn't have the numbers they needed to give themselves some well-deserved time off but were so dedicated they did what they had to do. I didn't understand what my wife and others were pouring into this, didn't fully appreciate what they were doing. I do now and consider myself lucky not going through that as well.

There was a large bump in enrollment after 2016 - hello, Kit - which allowed them to both expand the size of the crews for each shift and  take some well-deserved time off. The numbers stayed relatively steady for a while, but with the march toward medieval times happening in places like Alabama and Georgia we're getting an influx of interested candidates again. Three training sessions have swelled our ranks and I find myself having to look at least a month or so out to book a shifts.

This is a good problem to have.

I was supposed to be a foot soldier today but when the scheduled Team Lead had to bow out I was happy to step up. A few months ago I would have been worried about having a pair of rookies to watch over, but putting them with experienced escorts to teach them the ropes makes having concerns unnecessary.

"Can I kick the signs instead?"

The training sessions are excellent (or so I've been told ::cough cough::). My rookies are both female, so they're already well-versed with having a bunch of arrogant, entitled men telling them that they're wrong, that they shouldn't be here, and that they have no right to make decisions concerning their own bodies. The sidewalk is a different venue, that's all.

I'm happy Roxy (her real name isn't Roxy but it absolutely should be) isn't going with the 'easier to request forgiveness than ask permission' approach. More questions follow about what we can or can't do, most of them garnering "uhm, please don't" from me as a response. We don't trip The Runner, we don't throw glitter, we don't use super soakers, we don't toss water balloons. Given the heat, I'm not sure anyone would mind the latter two today.

It's possible the rookies are a little underwhelmed by their maiden shift, given the dearth of protesters and the lack of zeal from those that are here. I've had this before with a first-timer who worked the door with me on an exceptionally quiet day. His second shift was a sidewalk-jamming circus where we were outnumbered three to one. You learn to appreciate the easy ones. Maybe there's not as much to write about, but it's not about us anyway. In a better world patients would be visiting the clinic with zero harassment and we'd be off doing different things on Saturday mornings. Alas, here we are.

At least Silly String hasn't come up for discussion yet.

"Hey! Uhm, I have something for you."

One of the other nice things about having a crew of seven is that it gives me a good deal of freedom to move about and go where needed. With two on the door and pairs north and south, I can join escorts to make a trio for incoming patients (always a boon when The Runner is underfoot), cover for someone who needs a break, or stand directly in front of the current screamer so my body can block their speaker. I'm just finishing up a final rotation of teams - the northern chunk of sidewalk stays in shade during most of our shifts so I've been shuffling people around to give them respite from the brutal sun - when someone calls out from the street behind me. Wariness is the first feeling to arrive. I turn, expecting, well, anything.

It's a young woman in a coupe, pulled far enough over so that she won't greatly impede traffic. Her door is open and she offers me a smile before saying, "Hold on." She then turns and reaches over to the passenger side seat. I'm in no-man's-land here, between two of my crews and being largely ignored by the listless protesters. If this is someone who wanted to turn and fire a shot into my chest, the tableau couldn't be any more perfect. I'm not getting that vibe, so instead I mop sweat from my brow and I wait.

"Here. Thank you all so much for what you're doing." She's holding a paper bag by the string handles, the side emblazoned with the name of a fairly famous bakery that's on the one-way street that runs parallel to ours. After shifts I almost always get caught up in the overflow from their undersized parking lot.

I take the bag and offer thanks, blushing like I do whenever someone does something nice for me. There's an awkward moment where I think she's trying to decide if it's okay to get out of her car and hug me - it would have been - but in the end she settles for thanking us again, smiling once more, and shutting her door before driving away.

There's a box inside the bag with writing on it. Of course I can't read it without my glasses, but I don't want to open it around others and I'm certainly not going to take it into the clinic before determining what's inside, despite how pleasant the bearer of gifts was. I step to the curb and, making sure nobody's near me - not even the Runner - I lift the lid and take a peek inside. 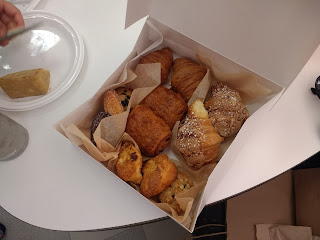 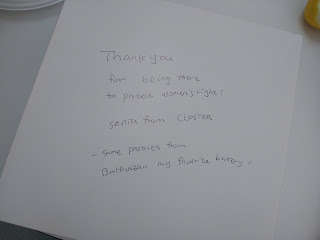 We don't do this for glory, recognition, or rewards. It's not about excitement or having an adrenaline rush - truly, the best shifts are the ones during which nothing happens, when the incoming patients suffer little to no harassment. We're out here doing what we can to protect a woman's right to control decisions about her own body, and so many of my fellow escorts do even more in arena besides this one. We're not out here for supportive horn honks, enthusiastic thumbs-ups, or drive-by gifts of delicious pastries.

That being said, they don't go unappreciated and they never, ever miss hitting our hearts.